A BIG THANKYOU TO THE CARLTON TOWN FAMILY AS BRIAN FIGHTS FOR HIS LIFE!

A BIG THANKYOU TO THE CARLTON TOWN FAMILY AS BRIAN FIGHTS FOR HIS LIFE!

We are sad to report that Brian Dennett as taken a turn for the worse and his now fighting for his life in hospital.

The family were called in at the weekend and sat with him in what doctors thought could be his last few hours, but he valiantly battles on, bravery fighting the awful Covid 19 virus.

The family are devastated that Brian was not given the vaccine after his major operation following his nasty fall but he was 79 instead of 80 his sister Lynn told us so was not vaccinated as it wasn’t his turn yet in terms of the age groups, but instead he was sent to a care home where he later caught Covid 19, he was vaccinated there, but by then he had already caught it.

Lynn said the family were extremely grateful for all the phone calls Brian received following a plea on this website. “It showed him how much he was loved by all his football friends and he really appreciated it” said Lynn.

The family and of course everyone involved with Carlton Town are praying for him , sitting and waiting for hopefully better news. 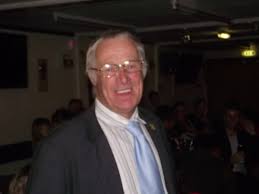