BRILLIANT AND EXTENSIVE INTERVIEWS BY JOSH HODGSON PUT THE ICING ON THE CAKE !

BRILLIANT AND EXTENSIVE INTERVIEWS BY JOSH HODGSON PUT THE ICING ON THE CAKE !

Carlton Town Tv like pretty much every department at the club from the Chairman, Vice Chairman and President downwards is dependent on volunteers and for the ten goal thriller against Wisbech, the club were lucky to have both Neil Ward and Josh Hodgson at the game, to not only capture 10 goals but to get the after match reaction.

Josh Hodgson’s brilliant interviews with Tommy Brookbanks and Daryl Thomas are now out on Millers Tv with Match highlights and a catch up with newly contracted player Tyler Joyal brilliantly finishing off the afternoon for the Millers in what was a remarkable afternoon at Stoke Lane.

The game was well in Carlton Towns grasp at 5-3 up and most management teams would have shut up shop, but Tommy and Mark brought on a third striker in Daryl Thomas who scored his first goal for the club in 11 years, something that went down well with supporters, he then admitted he’d given the ball away which helped Wisbech score a fourth, you could not make it up and as Josh Hodgson alluded to ” How do you break down that game?”

Brookbanks talks of his pleasure of clean sheets in his interview, but many supporters will remember similar score lines over the years in his previous tenure at the club.

A twitter comment by club legend Grant Brindley summed it up nicely and in fairness, it is only 3 weeks since Carlton beat Ilkeston 4-2.

The big positive for Brookbanks and Harvey will be the way the team came back from 2-0 down and the managers have clearly built a fantastic atmosphere at the club, something that was apparent in the clubhouse until well after the game.

The Chairman had special praise for Tom Maddison after the game who came under intense pressure before scoring another penalty, in cricket it’s called sledging!

Arron Opoku after a goal and another excellent display won the man of the match award from the Supporters and when asked to go up for an interview after the game, Daryl ‘The Massia’ Thomas said it was about time, the press team had just been waiting for that goal and it was a good one !

The club would also like to thank the Willowbrook Pub for their Match Ball Sponsorship for a game that will go down in history, we are certain Sam Hodkin is looking back now !

Carlton are home again next Saturday when Chasetown are the visitors to Stoke Lane, supporters will be hoping for more of the same, the dugout maybe not so much ! 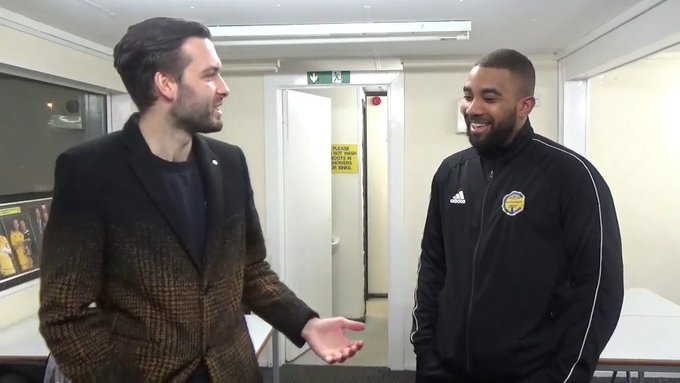