CARLTON EDGE OUT GEDLING IN 7 GOAL THRILLER AT STOKE LANE!

CARLTON EDGE OUT GEDLING IN 7 GOAL THRILLER AT STOKE LANE!

Carlton Town reached the quarter finals of the Notts Senior Cup with a narrow 4-3 win against local neighbours Gedling Miners Welfare in front of a satisfying 143 at Stoke Lane.

The game in fairness could have gone either way with Carlton missing several regulars and Gedling playing exceptionally well. The game ebbed and flowed and it was difficult to pick out who would go through to the next round, but it was a Tom Maddison penalty at the death that gave Carlton the win after former Miller Ruben Wiggins-Thomas scored his second goal for Gedling.

Maddison’s penalty gave him a brace with the other crucial Millers goals coming from the Evergreen Daryl Thomas and James Matthews and it was great to see James hit his first goal for the Millers. The impressive Rhys Harbottle also scored for Gedling shortly after half time in this rollercoaster of a game.

Former Carlton Double winning Senior Cup manager Les McJannet was the club’s very special guest and spoke in the Howard Mitchell Sportsbar to supporters and Carlton Town Tv before the game and the interview is now on Carlton Town Tv.

Former Millers manager Wayne Scott who also led the club to Senior Cup glory over Basford United in 2017 at Meadow Lane was also at the game and current Joint Manager Tommy Brookbanks was delighted to get through to the next round after admitting in his post match interview how well Gedling had played.

Tommy’s interview with Senior Media Corespondent Josh Hodgson is also on Carlton Town Tv along with one from Sponsors man of the match Tom Maddison who was presented with his prize by Les McJannet as pictured.

A nice touch at the end of the evening saw Les McJannet win £20 on the number card and immediately announce, he was donating it back to the club, Boatsy kindly gave him £20 worth of Christmas draw tickets as a nice alternative.

It was great to have Les back and the supporters club were quick to acknowledge this and equally happy with a 4-3 win even if admittedly it was by the skin of their teeth.

Carlton return to action this coming Saturday when Stamford AFC are the visitors to Stoke Lane for what will undoubtedly be one of Carlton’s toughest game of the season and win, lose or draw, the squad will be going out for a few Christmas drinks after the game and supporters are welcome to join them. 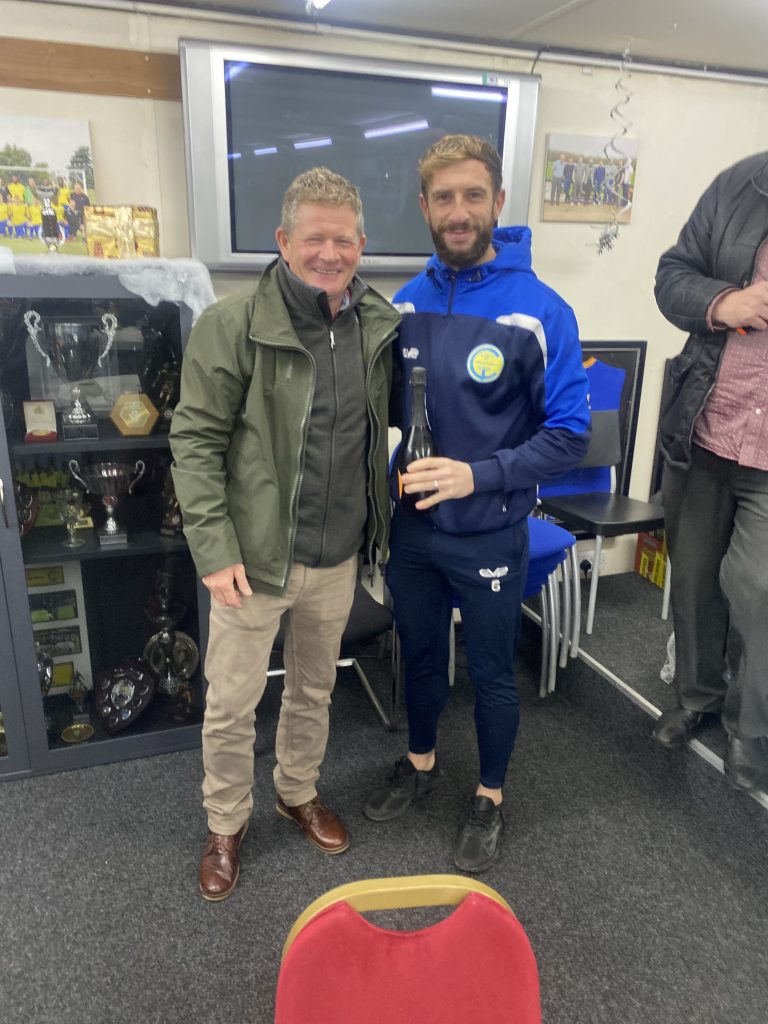