A combination of the woodwork, a never say die attitude and some brilliant saves by goalkeeper Jack Steggles meant Carlton Town are into the next qualifying round of the Fa Cup.

It was over 12 months ago when Carlton lost at the same stage of the competition to Barton Town Old Boys and Jack Steggles had an afternoon to forget.

This was completely reversed this time round however against the excellent Loughborough University side, who will have left Stoke Lane proud of their performance, but bitterly disappointed to lose a game they came so close to winning.

Carlton however were to blame for finding themselves on the back foot after a bright start, it was a poor back pass to Steggles that left the keeper stranded and was well finished by Kamen Cashmore.

The goal gave Loughborough the boost they needed and Steggles had to be at his sharpest to ensure they did not extend their lead.

Loughborough were not helped when two of their players clashed heads and after a lengthy stoppage, both eventually had to come off and they lost a third player to injury before half time meaning all three substitutes had been used.

Carlton improved towards the end of the first half but created little and it was time for Tommy and Mark to work some half time magic.

The second half progressed with Carlton on the front foot playing some nice football with only the crucial final ball letting them down and Loughborough extremely dangerous on the break.

Steggles made a fine save against the run of play and from a second save a few minutes later, Loughborough hit the bar with the follow up but it was that man Oliver Clark who got the equaliser for Carlton from a Niall Davey corner.

The game could now go either way and when Dan Brown was shown a red card for a foul as last man on the edge of the box, Loughborough were once again in the ascendancy but from the following free kick, they hit the crossbar with Steggles for once stranded.

There was still time for the impressive Loughborough to hit the woodwork again before the referee brought proceedings to a close at 1-1.

Carlton had fought hard to get back into this game and in fairness this group of lads never know when they are beaten and they were determined not to slip up going into the penalty shot out and Tyler Blake, Lawrence Gorman, Oliver Clark and the ever reliable Tom Maddison all scored from the spot while Jack Steggles saved two penalties to see the Millers into the next round.

If Loughborough play to this standard all season, they will certainly be in the running for promotion and for Carlton’s part, they will be hoping to step up to the plate at Oadby Town on September 12th.

The Talksport coverage certainly helped in the build up to the game with brilliant broadcaster Laura Woods getting involved on air and on Twitter and Jack Steggles sending home the majority of the 176 spectators happy, the man of the match on this occasion was an easy one for Match Ball Sponsors Msr Newsgroup. 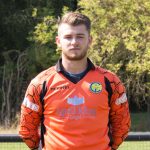