HONOURS EVEN IN TOP SEVEN CLASH AT COLESHILL TOWN!

HONOURS EVEN IN TOP SEVEN CLASH AT COLESHILL TOWN!

There was a second half debut for big new signing Arron O’ Connor and he very nearly scored Carlton the winner at the death , but his excellent effort was deflected by the post.

That apart, Carlton really should have had a goal or two from their first half dominance, but Tyler Blake drew a decent early save from the keeper and then agonisingly saw his next effort come back off the inside of the post, after timing his run to perfection.

The ever Creative Nat Watson went off injured early in the second half and soon after Coleshill who were now on top got the opener.

Tommy and Mark made decisive changes soon afterwards and Tyler Johal and Niall Davey were both causing Coleshill numerous problems on the left drawing a number of fouls throughout.

It was from one of those free kicks into the box that Carlton eventually drew level , it looked as though the final touch came from a Coleshill defender, but Toby Moore was claiming it after revealing he knocked it towards the goal initially, there were lots of bodies in there, so it was difficult to see exactly how it ended up in the net, but Carlton will take it and Toby (Pictured) is welcome to it !

Tommy has pointed out previously that as soon as you drop points, the teams above all win and that was the case again today, with Halesowen, Chasetown and Stamford at the death all picking up wins.

It really is a case of the top 7 seemingly battling for the five places, Carlton have beaten Coleshill at Stoke Lane and picked up a point on their travels against quality opposition, so have to be happy with that overall, but they now have to look to push on in the coming games starting with the visit of Wisbech on Saturday.

We will have a full build up to that in the coming days, with some big news on the mascot sponsor and a very special guest to be announced.

In the meantime , the club’s senior Media Correspondent Josh Hodgson was on hand to catch up with Mark Harvey at the final whistle. 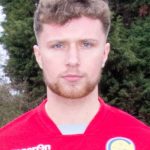