Carlton Town Chairman Mick Garton has revealed more details of the Howard Mitchell Sponsorship deal announced yesterday and revealed that the improvements in the bar are a three way partnership between the club, Marstons Brewery and The Howard Mitchell group.
Dave Hodgson had already secured some funding to improve the bar, while Club President Roger Smith was in talks with Marstons Brewery to see what they could do to help
When fans are allowed back in on Monday 17th May.
The new look Sportsbar still has the Darts board and Pool Table in place along with 4 screens to view Sky Tv, throw into the mix a superb new stage and Vinyl DJ desks built in to a purpose made unit with extra lighting, new upholstery to the seats on the back wall ,new carpeting in the bar and new floor coverings to the area approaching the bar.
New doors are still to be fitted and new floor coverings behind the bar and new floor coverings inside the toilets have also been given the go ahead.
New signage will also be in place soon on the outside of the bar and their will be an official reopening night where the new sponsors will be in attendance to meet fans and various invited guests from across the club.
The new sponsors are also keen on competitive beer prices and as part of the deal secured by Roger Smith and this deal, the club can comfirm that the all new Sam Miguel will remain at £3.60 a pint for the foreseeable future.
The club will also have soft drinks and white wine on draught for the first time ever.
The is much to look forward with the Big Boatsy Charity event on Sunday 30th May the next big event at the Bill Stokeld Stadium.
Providing restrictions are lifted along the lines of the road map set out by prime minister Boris Johnson, Carlton are hoping to hold at least two speakers events before the end of this year as they attempt to get fund raising back on track.
The club have had many famous guests in the Past including former World Cup final referee Howard Webb who is pictured with club legend Martin Ball in the Clubhouse.
In the meantime, the club is encouraging everyone to get behind Boatsy’s fantastic raffle with the most incredible list of prizes ever.
Tickets are £5 a strip or 3 strips for £10 and will be available behind the bar from this coming week or from the Chairman himself.
Our new sponsors can’t wait to get involved and are hoping for a relationship in the long term which is obviously what the club and supporters will be delighted to hear.
They have given us the following positive statement.

Howard Mitchell Group work as suppliers to the construction industry and have been operating for seven years, with the head office based in Gedling village.
Owner Mitch and his colleague Tom are keen football fans and have been supporting Carlton Town for the last few years, attending homes games on an increasing regular basis.
Having grown the business over the past year, they have been eager to reinvest in the local community and support projects close to their hearts, which is why they have been so keen to work with Carlton Town.
Following meetings with club representatives the decision was made to sponsor the club’s sports bar, in the process renaming the bar to the Howard Mitchell Sports Bar, to help improve the services and, hopefully, keep beer prices down for the regulars!
Mitch and Tom, as well as their friends and family, are delighted to be able to sponsor the bar and help the club continue to move forward and will be regular faces, once the world is back to normal, at our beloved Stoke Lane.
Everyone at Howard Mitchell hopes that this is just the start of a long and trophy-laden relationship with the club.
UP THE MILLERS!
The club will give details of the official opening and the chance to meet the new sponsors in due course.
Carlton were in friendly action at Eastwood Community Club this afternoon and despite scoring 2 early goals through Josh Rae and Tyler Blake, had to settle for a 2-2 draw in an entertaining friendly with Kieran Knight and Dam Moore scoring for the home side which featured a number of former Miller players. 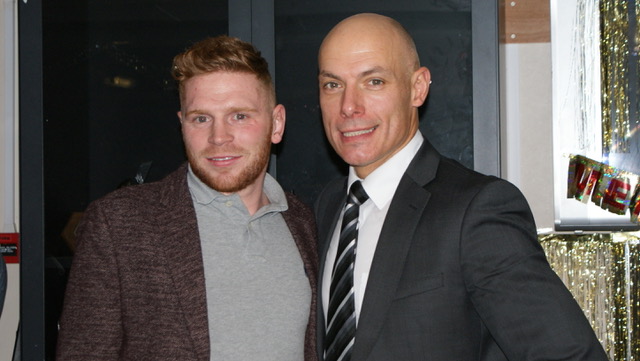