Nat Watson was the big winner as the club celebrated their super season at their annual awards ceremony in the Howard Mitchell Sportsbar at Stoke Lane on Friday night.

Carlton Town Tv were in attendance for one of the biggest nights of the season as players, Commitee and supporters came together in good spirits following Wednesday night’s Senior Cup final win over Mansfield Town under 23’s.

The club’s in house Tv channel made a point of interviewing people they would not normally interview and a special programme will be put together by Quentin in the coming days featuring the awards ceremony, footage from the cup final and exclusive interviews with Vice Chairman Barry North, Strategic Development Officer Dave Hodgson, Miller Mouse Ladies and club volunteers Kerry and Lou, supporter Reece ‘The Bear’ Hughes and players Niall Davie, Arron Opoku and Jarred Holmes and the interviews carried out were shared by the Senior Millers Press team Josh Hodgson and John Bryson.

Nottingham Forest legend Ian Storey-Moore was the club’s very special guest for the evening and Tommy Brookbanks was on fine form dominating much of the evening with quips and banter as he took to the microphone and successful partner Mark Harvey was grateful when he finally got a word in !

There were 10 Trophies in all awarded during an emotionally charged evening and first up were the Reserves and Dan Goddard. Dan announced his teams Manager’s player as Jake Wood and Players player Sonny Shaw and although Jake was not in attendance, Sonny was and came up and spoke well when interviewed by Chairman Mick Garton.

On to the first team it was and the most improved player went deservedly to Dan Brown who also picked up the President’s award.

The Clubman was probably the easiest decision of the night with Gary ‘Boatsy’ Clarke getting unanimous support for the prize, understandable indeed after his fantastic contribution this season. Dave Hodgson won the Chairman’s award and it was clear to see from their reaction what the awards meant to  both Boatsy and Dave, two fantastic people who are a massive part of the heartbeat of the club.

Darryl Claypole announced he would kindly financially support the away trip to Merthyr Tydfil and donated £500 to the Players end of season away night in Cardiff and we are confident people at the club will contribute generously to  valuable charity work Daryl is soon to be involved with.

Alan Murphy’s trip to the podium is always one that is eagerly anticipated and he didn’t disappoint on this occasion, bringing along goal of the season highlights for the big screen before announcing Lawrence Gorman as the winner, worthy indeed !

One man stole the show however and it was Nat Watson, Managers player, Supporters Player and finally the big one Players player. Everyone at the club will be delighted Nat is already committed to the club for next season and listening to Joint Manager Tommy Brookbanks in his upbeat speech, it seems generally most players are, it’s a positive position to be in at the end of season when Carlton have won the Nottinghamshire Senior Cup and only missed out on the playoffs on the very last day.

Nat is pictured with the Mini Millers who were so prominent and vocal at the Cup Final, the support of Paul Lowe and World Game Changers and the Junior section at the final was a vital cog in the wheel of that fantastic win ! 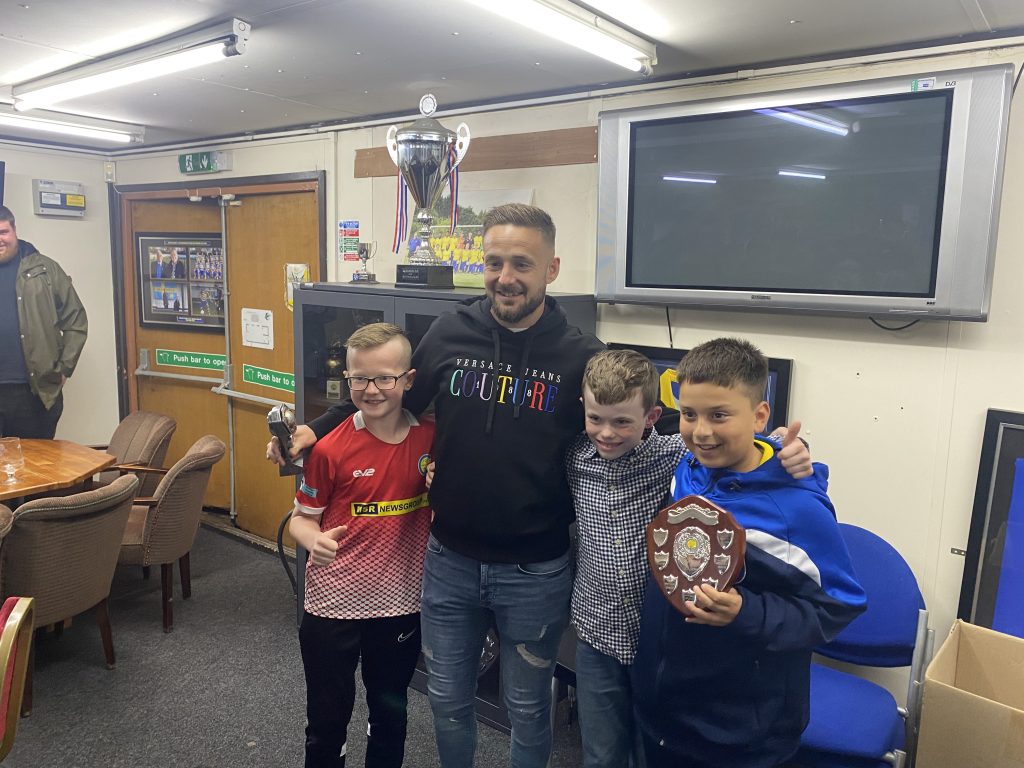