PROPOSED TOURNAMENT CUP TO BE NAMED IN HONOUR OF BRIAN !

PROPOSED TOURNAMENT CUP TO BE NAMED IN HONOUR OF BRIAN !

There is still no start date for the proposed 16 team tournament with the government lifting many restrictions from 12th April , but supporters remained banned despite the fact bars can reopen for outdoor service.

Tommy Brookbanks thinks an announcement may follow in the coming weeks as cases continue to fall, but at the moment, no supporters are allowed in until June 21st.

The management committee have several options in place, but if restrictions on fans are not lifted until June, the tournament will not go ahead in April and May without supporters.

The fall back option is to play the tournament in July as a pre season tournament with clubs able to play trialists and look at youngsters as well as giving game time to their senior players.

Chairman Dick Durant will approach clubs with this option in due course if restrictions are not lifted for spectators to watch grass roots football earlier.

“Following the sad news of the death of Brian Dennett earlier this week, we spoke with Mick Garton to discuss the naming of the inaugural City Couriers Direct football tournament and suggested that the trophy be named after Brian. We felt this would be appropriate as the tournament is primarily for local football clubs and no-one was more keen on the promotion of local football than Brian himself, our thoughts are with Brian’s family at this time, but we fervently hope that his name will live long in the memory of local football fans”

However the club caught up with Brian’s family today, who have been moved by the response to Brian’s sad passing this week and the number of messages and phone calls he received while in hospital, they gave us the following statement.

“Our dad Brian loved Carlton Town, he dedicated a huge amount of his time to fund raising and promoting the club and always seemed to have a fistful of raffle tickets and event tickets to sell.        It is amazing that he is being remembered in this way, his heart and soul were in the club and now his name and memory will continue in the place and with the people he loved. We will be forever proud of our Dad”

The message came in from his son Alex, his daughter Claire and sister Lynn who have all been keeping various people at the club up to date as Brian’s condition sadly worsened over the last couple of weeks.

The club is grateful to them for that and we understand plans are being looked at to stream the funeral with Covid restrictions limiting who can attend.

The picture used with this clip shows Brian welcoming a spectator at the ground, something he did at every single game. 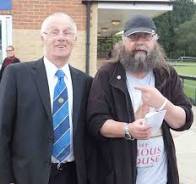