STEGGLES BACK AND THE HERO AT AN EMOTIONALLY CHARGED STOKE LANE

STEGGLES BACK AND THE HERO AT AN EMOTIONALLY CHARGED STOKE LANE

Nobody can deny the positive impact Kieran Preston has contributed this season since taking the first team gloves off Jack Steggles, his performances have been excellent indeed, but the Millers long time goalkeeper Jack remains extremely popular among supporters and Commitee alike, there were times in the season when the Millers nearly went down, that Steggles single handedly at times kept Carlton in games and with Kieran unable to play, Jack out on loan with Newark Flowserve was back today for their big Fa Trophy clash with Bedworth United and what a game he had!

It didn’t start particularly well with right back Lawrence Gorman hitting his own post with an overhit backpass , more errors followed generally and the Millers were second best in the first half and it was no surprise when Bedworth took the lead with a far post header.

A brilliant double save from Steggles denied Bedworth the chance of extending their lead and as Carlton improved as the half went on, Louis Czerwak and Kieran Knight both went close to bringing the Millers level.

In the second half, Carlton improved but it wasn’t until the introduction of Nat Watson that they looked like scoring and what a goal it was from the boots of that man Niall Davie, a brilliant free kick off the underside of the bar , hit like an exocet missille.

Tommy and Mark had thrown caution to the wind by now with the evergreen Daryl Thomas coming on upfront to replace defender Lawrence Gorman.

Carlton were now on top, but couldn’t find a winner and it was Steggles again who kept Carlton alive with two more fine saves as Bedworth hit the Millers on the break, one with the last kick of the game before penalties.

Yes penalties and Jack Steggles has a decent record to be fair of saving one or two!

Cometh the moment, Cometh the man and Jack Steggles delivered on the big stage for Carlton with 3 outstanding saves from the 7 penalties he faced and just for good measure as well, he scored one himself after volunteering to take one, signs of his pedigree and character indeed.

For the record, Tom Maddison does what Tom Maddison does and scored his penalty, efforts by Dan Brown and Niall Davie were excellently saved by the impressive and commanding Bedworth keeper before Nat Watson, Daryll Thomas, Jack Steggles as mentioned and Toby Moore expertly placed their penalties into the corner of the net before that last crucial save from Jack Steggles to his left with a big strong hand making his dad, his family and in particular the Chairman very proud and somewhat emotional.

Senior media correspondent Josh Hodgson spoke to both Jack Steggles and Joint manager Mark Harvey in the Chuck Fowler Suite after the game and both interviews can be seen on Carlton Town Tv which can be accessed by going to the home page of this website.

Jack also received the man of the match award from Match Sponsors B4 painting and is pictured receiving his well deserved wine.

The Millers can now  look forward to the draw next week and to the next 3rd qualifying round which will take place on Saturday 30th October. 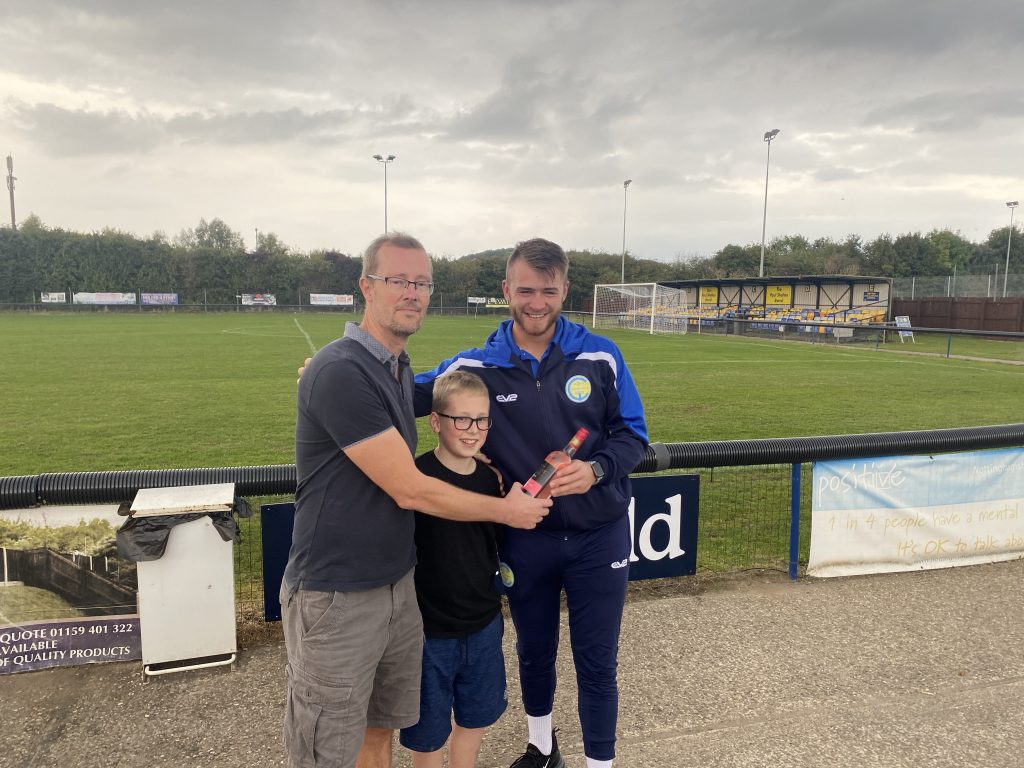