Taste of football today visited Carlton Town and caught up with Chairman Mick Garton who was at the ground launching the 2019 Christmas Draw with Mark Steggles and also secured an in depth interview with Vice Chairman Barry North who was also at the Bill Stokeld Stadium.

Tom Quartly and camera man Michael Pawluk (both pictured) are an impressive team and Tom explained to the Chairman his performance analyst work with “between the posts.net”

Both lads are only 19 years old but took a keen interest in their topic of the day Carlton Town Fc , spending over 2 hours at The Bill Stokeld Stadium and Garton was left impressed.

“Michael would be the first to admit, he’s not a big football fan, but he took a really keen interest in  the whole surrounds and the pictures and facilities and history of the club and I was impressed with the research Tom had done before coming to meet us and I understand Barry has given them a really good interview today which will be shared with Carlton Town Tv in due course”

“On a personal level, myself, Stegs and Mark Buckley from Mapperley All Stars who I met up with earlier were all keen to get the show on the road by launching the Christmas draw and build towards the big draw on Saturday 21st December” concluded the Millers Chairman. 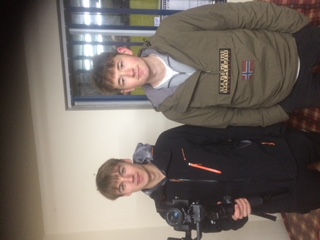