TRULY TRULY TREMENDOUS, A DAY TO REMEMBER AT STOKE LANE!

TRULY TRULY TREMENDOUS, A DAY TO REMEMBER AT STOKE LANE!

On Thursday, Carlton hosted a fantastic charity event for Ac Wollaton Fc, role forward three days and it was Boatsy’s turn for the Millers themselves and for World Game Changers, a cracking charity headed up by a man who has done so much good in Nottingham over Many years Paul Lowe.

The sun shined, the stars came out and the public finally allowed back into a non league ground came and supported in their numbers.

The outstanding Sanj Beri swung into action with his first set at about 1pm and created a fantastic tempo and atmosphere to set up the afternoon.

Carlton Town were in action against a World Game Changers x1 with some special local stars in their opponents line up including Andy Reid, John Thompson, Craig Armstrong and British Boxing Champion Leigh Wood, not to mention Nottingham Forest ladies captain Lyndsey Harkin.

Clinton Morrison was not fit to play, but turned up nonetheless as promised to support the event and posed for photographs with youngsters and Talksport presenter Jonny Owen rushed back to Nottingham from Talksports London Bridge studios following his live show to host the big prize draw and big prize draw it was with some fantastic prizes.

The popular Talk Sport host is pictured (tallest) at the back on our cover photo which includes Carlton’s Mark Harvey and Tommy Brookbanks and some key members of Team Boatsy and the man himself, bottom (far right).

The publicity given to the event by Owen and his partner Line of Duty’s Vicky McClure had certainly helped boost numbers with their social media post attracting an incredible 16,900 views.

Former Nottingham Forest Legend Colin Barrett kicked off the game after a brilliant big game build up from DJ Sanj Beri and the game did not disappoint.

Carlton took the lead on 24 minutes when new signing James Matthews converted a penalty and a brace from Tyler Blake put the Millers 3-0 in front, Joel Daft made it 4 on the Stroke  of half time, but whatever opposition manager Charlie McParland said during the interval certainly worked as World Game Changers came storming back in the second half.

The excellent Jemma Connor-Lommi scored two goals including a cracker and with Chris Freestone also getting on the scoresheet, the Millers were at the end hanging on for victory, but win they did 4-3 in what turned out to be a fine game.

Time up for post match interviews with Notts Tv who were covering the game and we look forward to seeing that and the goal action again and a big Thankyou to Owen for his coverage and time over the last few days from everyone at the Charity and the club.

Dj Sanj Beri swung back into action and the Nottingham Forest Trumpter also did a live set and the crowd got into the spirit as a number of Forest favourites were sung by the still substantial remaining crowd, some who had come from various parts of the country.

The beer was by now running low, new bids came in for the auction and Jonny Owen and Mark Slythe did their bit with the raffle.

The work continues over the coming days, in particular for that man Boatsy who now as to contact Auction winners and raffle winners, although quite a few were in the ground with some showing great excitement at winning prizes, none more so than the popular Gaz Bee.

Such was the success of this event, there were approaches to both Chairman Mick Garton and Boatsy to make it an annual event, positive feedback indeed and the many messages on social media certainly added to that feeling of positivity.

Charity Chief Paul Lowe contacted the club this morning to express his delight, thanks and praise for a great team effort and said he included in that everyone involved in the day including all the staff, Match Officials and all those involved in the setting up of the day which had taken place over a number of days and indeed all the fantastic sponsors. Paul will put out a full statement in due course when it has been established how much has indeed been raised and after he has received a full debriefing.

The biggest praise however should go to Boatsy and Team Boatsy, what a great effort and a memorable, memorable day that will long live in the memory for spectators denied their freedoms for so long due to Covid 19.

THANKYOU EVERYONE WHO ATTENDED AND WAS INVOLVED FROM CARLTON TOWN FC AND WORLD GAME CHANGERS, YOU DID NOTTINGHAM PROUD! 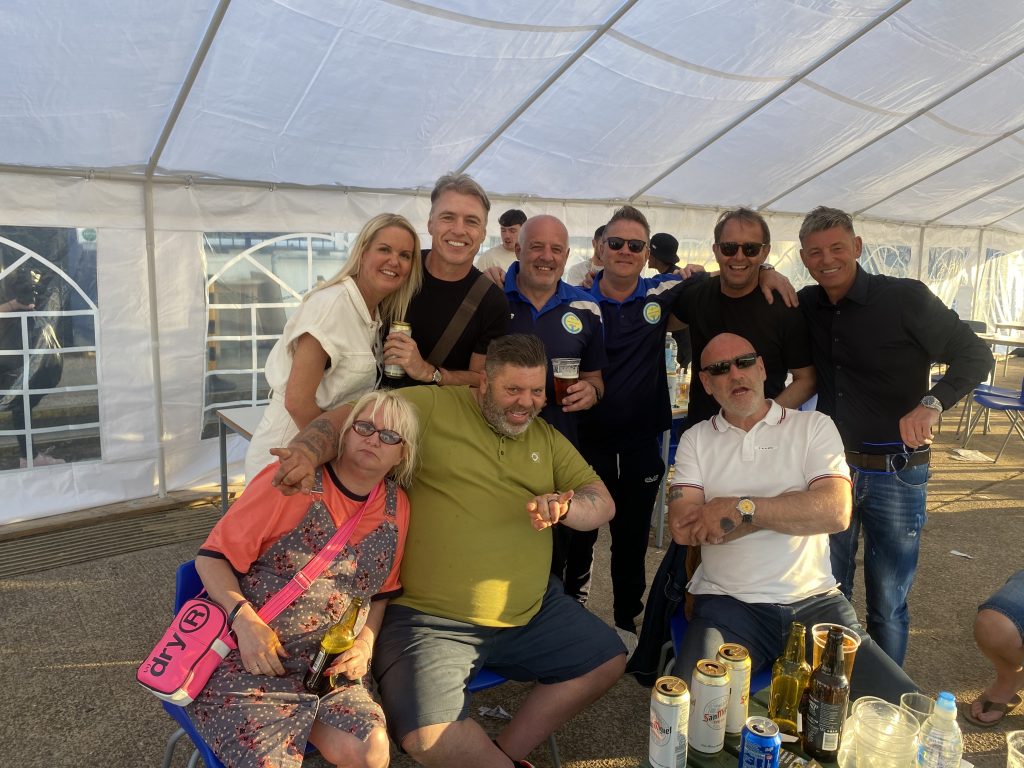